Interested in our Axial Fans? See what we have to offer.

Air Turbine Propeller was commissioned to create large fan blades to produce the high winds required to create the life-like special effects for the movie.

Along with providing the fans for special effects on the movie set of Twister, Air Turbine Propeller was engaged to fabricate fans for the Universal Studios Theme Park ride Twister.

For the 1996 Summer Olympics held in Atlanta Georgia, Air Turbine Propeller provided the fan blades for the air moving equipment that raised the streamers on the top left hand side of the photo below. 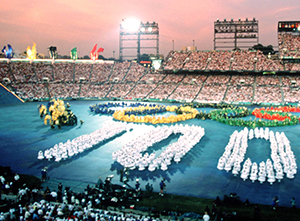 Below you can see two of our fan blades incorporated into the Universal Studios' Theme Park Ride Dr. Doom.